‘A notable debut for Turnbull’

‘Fierce Tears offers further proof that the oboe’s contemporary repertoire continues to thrive; and in James Turnbull it has a worthy champion.’

‘Fierce Tears represents a major contribution to the catalogue of British contemporary oboe recordings and a great personal achievement for James Turnbull.’ 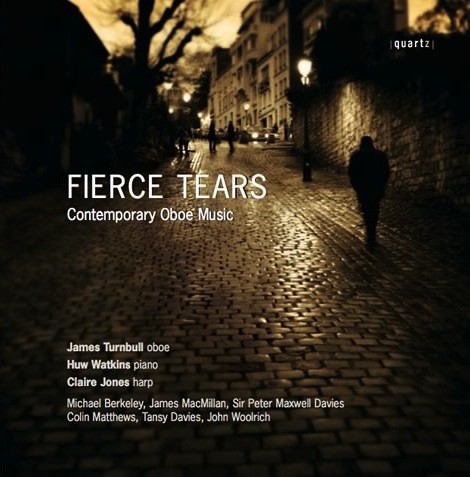 Since the start of the twentieth century, oboists have been fortunate to receive some very special and powerful works from a wide variety of composers. As we progress further into the twenty-first century, it is important to show that the repertoire is continuing to thrive and be developed by many gifted composers who carry on extending the expressive boundaries of the instrument.

The repertoire on this disc has been chosen in a deliberate attempt to assemble works from the past 30 years by British composers that demonstrate the great contrasts possible with the modern oboe. There are pieces that emphasize stillness and meditation while others focus on the raw emotions of anger and grief.

It is available to purchase directly from the shop page on this website as well asfrom numerous outlets such as iTunes, Amazon, or from Quartz directly. Click on a link below to be taken directly to the relevant page. Short samples of each track are also available by clicking on the track name below.

To stay in touch with James' latest concerts and CD releases, fill in your details below for occasional updates.